Bazlama and Artisan Bread in Five Minutes a Day

I just LOVE fresh bread.  I don't have a breadmaking machine and I'm not sure that I want one. I do have a great book, Artisan Bread in Five Minutes a Day by Jeff Hertzberg and Zöe François , that helps make daily breadbaking a reality in my house. The basis concept is making dough, enough for several loaves, and storing it in the refrigerator till needed--over several days, or as long as it lasts!  The website is:http://www.artisanbreadinfive.com/I haven't made full use of this method, but I have had fresh baked Bazlama--a Turkish flatbread I cook on a cast iron griddle--every day for 3 days now.

I got the recipe from allrecipes.com:http://allrecipes.com/Recipe/bazlama---turkish-flat-bread/detail.aspx but altered it (how much can you alter Bazlama before it is no longer Bazlama???)

Bazlama recipe I used
2 1/4 t. instant dried yeast (I buy it in large packages at Sam's since yeast packets are so expensive. Yeast freezes well.)
1 T. sugar
1 Tablespoon salt (this seemed too salty--I will decrease to 2 teaspoons)
1 1/2 c. warm water
1/2 c. thick yogurt--strained homemade yogurt or "Greek Style"
I mixed all this well with a whisk, and added
2 cups King Arthur white whole wheat flour
2 c. (plus some) unbleached all purpose flour
I mixed up the yeast, salt, water, yogurt with a whisk and added flour about 1 cup at at time, working in well, till formed a soft, not too sticky dough. I added enough flour so the dough wasn't too sticky, but it was soft and I kind of kneaded it in the bowl I mixed it in till it was all mixed well. I laid plastic wrap on top of the dough and  I covered the bowl with aluminum foil and put it in the refrigerator. I ended up dividing it into 8 loaves.  I guess it made 8 tennis ball sized loaves that I rolled out to fit in my 10 1/2 inch cast iron griddle.  The first 2 loaves I made, I forgot to set it out to rest.  It was okay. I cooked it on the setting between medium low and medium heat. The other times, I set out a ball of dough I was going to cook and it did best when I rolled it out and let it sit for about 15 minutes or so before transferring it to the griddle using a peel. I cooked it on one side till it bubbled up and was having brown spots on the botton and it looked "done", then I flipped it over. Here are pictures...the one showing it about ready to flip....see the bubbled parts?  Then I flipped it...don't know what was charred and left black ashes , but it wiped right off. It might have been flour, I don't know. Then the last picture is when I flipped it again. Looks like I was overly generous dusting it with flour, but I guess I didn't want it to stick to anything.  So, I guess I used this over 3 or 4 days and it was fine. 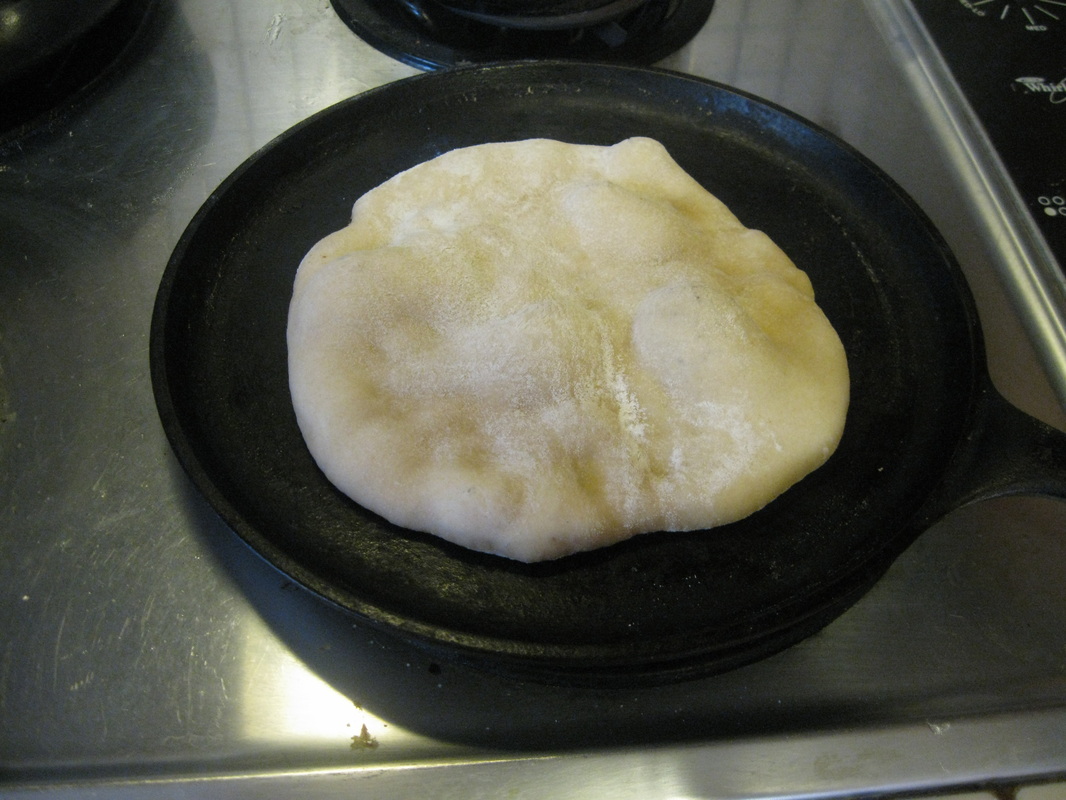 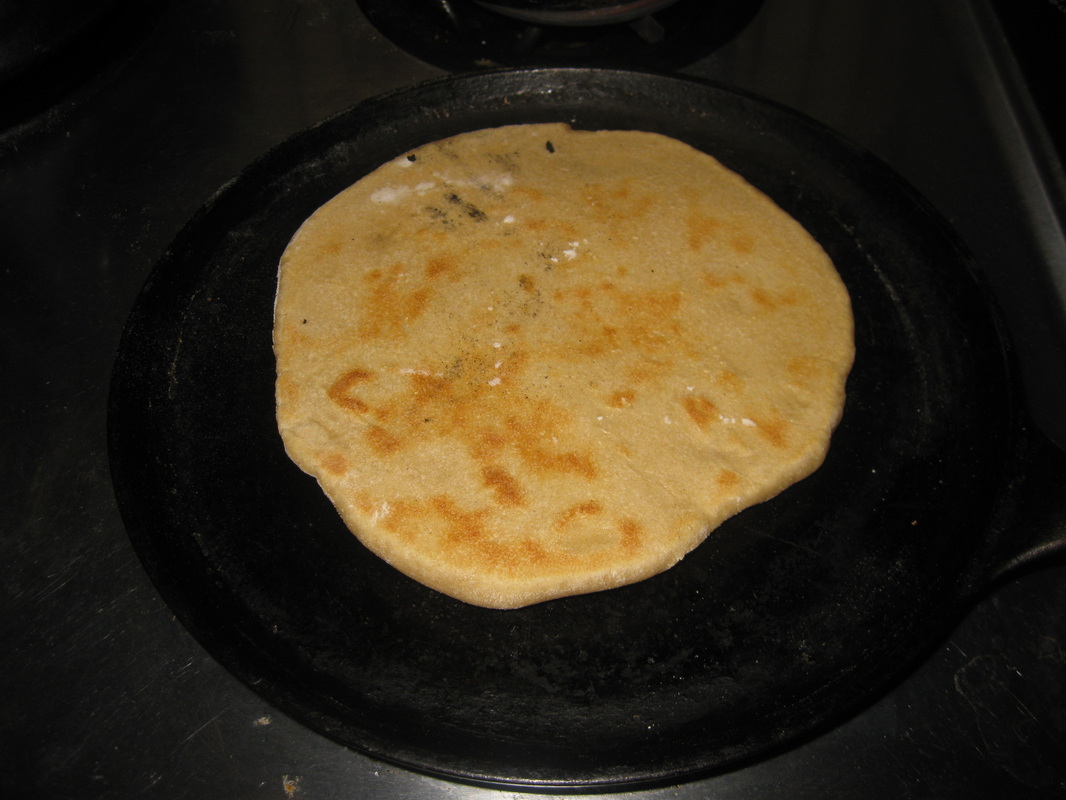 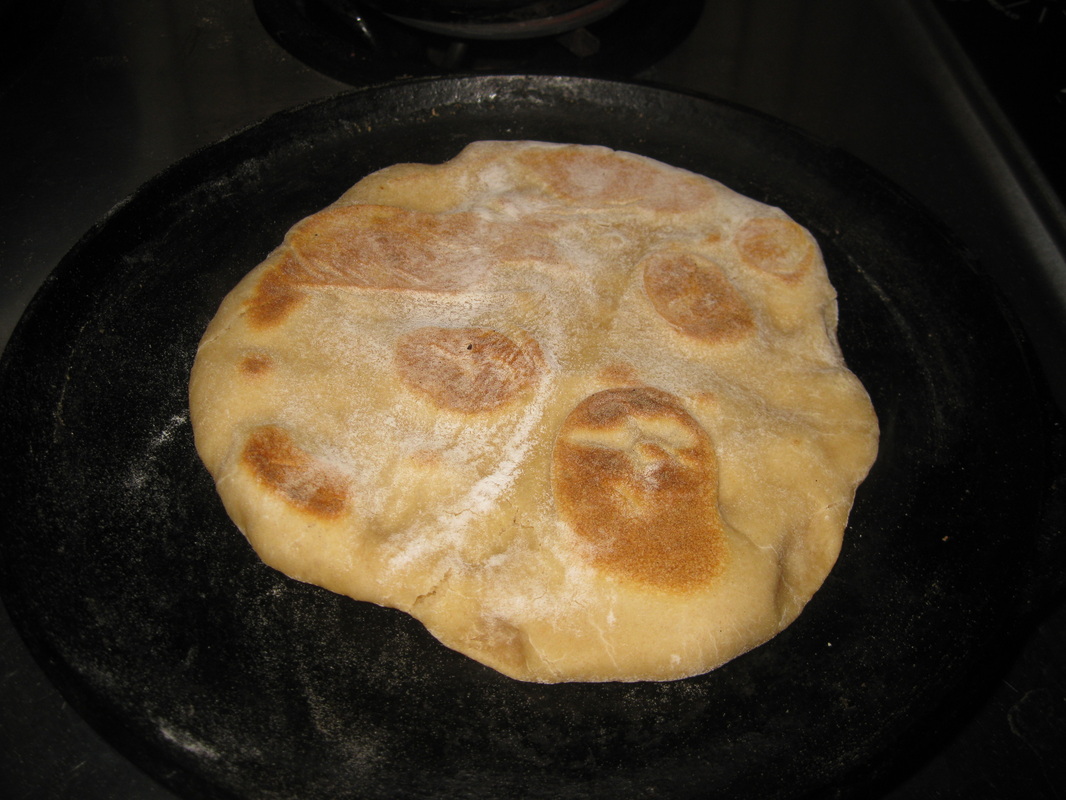 Half Moon Börek
I used about half of the dough to make some half-moon borek.  I made 4, but then made a 5th one from the scraps of dough.  Here is Zerrin's recipe:
http://www.giverecipe.com/halfmoon-borek.html
When my little girl's Turkish grandmother was here, she used a lot of plain white frozen bread dough from the grocery store. One of the things she did with it was made some "turnovers" and I believe she stuffed them with parsley and crumbled feta cheese (I also buy my feta cheese from Sam's as it is most economical and I usually use it all before it spoils.  A 2.31 pound block was $8.16.) She rolled it out, put the filling on one side, folded the other side over and she ran the edge of a saucer around the edge to seal and trim it.  Then she cooked it in a non-stick skillet. My circles weren't very round, so I ended up trimming a good bit...enough to make the 5th borek all from scraps. I cooked them on the cast iron griddle and in a large cast iron skillet. I filled them with chopped flat leaf parsley, crumbled feta and some VERY finely chopped onion.They were good! They really needed to be cut in half before eating..they were kind of awkwardly long. Here's a picture: 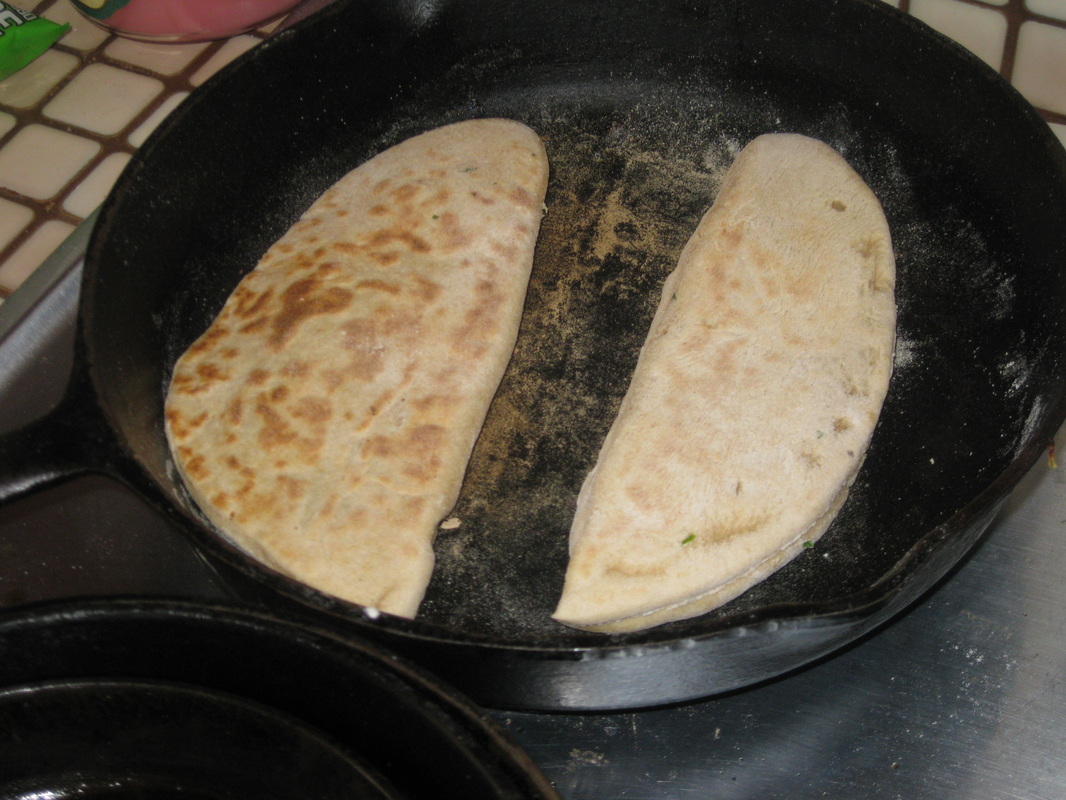 Tip: when chopping herbs and onions for dolma if you don't have a food processor-throw them into a blender, cover with water and "chop" for a few seconds, and then dump into a strainer to drain. I peel and quarter the onions or garlic and de-stem parsley and other herbs and it is SO much easier and quicker! I guess this would work for kisir and tabbouli and other things that take lots of chopping!

Here's how I make my homemade yogurt.
What I use:
milk (I use 1/2 gallon of whole or 2% milk, but you can use skim
starter (I use either 1 small container (about 5 oz) of greek yogurt with live cultures or about 1/4 c. of a previous batch if it was pretty fresh)
A thermometer (I have a spoon with a built in thermometer that says when to "add starter" that came with a yogurt maker I bought from a thrift store, which didn't work, but it had the thermometer and 6 glass jars with plastic lids, so it was worth my $2 or so, anyway)
A stainless steel or glass or enamel (not aluminum) pan--I use a Revere ware dutch oven, which is bigger than I need, but my next smallest pan is too small
a whisk
glass wide-mouth canning jars (these are my favorite http://www.canningpantry.com/ball-elite-platinum-pint-jars.html and plastic screw-on lids to fit (like here http://www.canningpantry.com/bawimoplstca.html and wal-mart may have them) I guess it takes 5 jars for 1/2 gallon plus the starter
pizza stone
oven
oven thermometer

for strained or greek style, you need either a Donvier strainer (I got mine at a thrift store for about $4 ) http://www.cooking.com/products/reviews.asp?SKU=110326 or a strainer lined with a coffee filter, sitting over a bowl.

Procedure:
Heat millk in pan till about boiling.  You can boil it for a couple minutes and it doesn't hurt anything from what I can tell. It will form a bit of a skin on top unless you stir it up, but I just lift it off and throw it out.  You heat it to kill undesireable bacteria. I make sure it is good and hot for a few minutes, then as I am usually in a hurry, I cool it quickly by sitting it in a sink of ice water and stirring till it gets to about 110-115 degrees.  Then I put the starter in one of the jars, add about 1/2 cup of the hot milk, and stir well, then dump it into the rest of the milk and stir well with the wisk.  Then I pour it into the jars ( I have never sterilized them, but they have usually been through the dishwasher) and put the tops on them.

Incubation:
I have found that if I turn on my 40 watt oven light, and heat my oven with pizza stone inside to about 120 and turn the heat off, it is pretty good at making the yogurt.  "They" say it should be around 110, but I have had it a little hotter and it didn't kill the culture. I set the jars on the pizza stone and turned the oven to "warm" and "bake for a couple of minutes if the thermometer got to 110 or lower.  In 4 hours, I had some set-up yogurt!  My oven gets too hot to leave it on the "warm" setting.  If you can get your oven or warming drawer to maintain a not too hot temp, the pizza stone would be optional.  I think I needed it to maintain heat.  I have had it incubate longer or just sit when I have forgotten about it with no ill effects. Chill it for it to set up a little more, then strain it for a few hours for "greek style".

Eating:
I mix in blender with fresh and/or frozen fruit for smoothies.  Make Turkish cacik or the very similar Greek tzatziki. mix with pressed garlic and salt for a great garlic/yogurt sauce for eggs, over cooked greens, etc. I don't like it plain, but my daughter does. I sometimes add some "all fruit preserves"

A 5+ oz. container of greek yogurt is $1 at Wal-mart, which is pretty affordable if you don't eat a lot. But I like to make my own!

Thanks to Marah Amasiah Mullins:
There are various recipes for frying up Ramen noodles, as a teen I used butter and just soften the noodles in hot water with or without the broth packet. Now I've added to it, I usually don't use the broth packet (unless making a large meal out of it)and save it for other recipes, since it's too strong to use without water. I put the brick of noodles in boiling water un-crushed, pull them out as soon as they soften but remain firm, throw them in a pan of heated olive or sesame oil, add some frz peas n'carrots or frz mixed veggies add a touch of soy sauce or try the flavored sauces like Stir Fry or Szechuan Sauce. Pull it out when evenly mixed and heated through.
The heat needs to be med-high, too high makes your noodles stick, too low won't fry them and they mush. Plus over boiling the noodles will become mushy too.

I feel like we can all use a more colorful diet! And don't forget to drink tea!  I find that having a smoothie made with yogurt and 2 colors of frozen fruit (banana/strawberry, banana/mango, blueberry/strawberry, etc.--Sam's carries lots of frozen fruit reasonably priced) and a colorful salad daily (cucumber, tomato, shredded red cabbage, onion (red is best), shredded carrot, bell pepper, dressed with lemon juice and olive oil, salt and pepper, maybe also with garlic, parsely, lettuce, avocado) is an easy way to get lots of phytochemicals and enzymes.
http://www.dana-farber.org/pat/support/nutrition/docs/phytonutrient-rich-foods.pdf

This is my Tuna Casserole Recipe I made up on 12/29/2010, but substitutions can be made (chicken instead of tuna, different veggies, etc).

Cook 1 c. elbow macaroni (or equivalent amount of other pasta)
Saute 1 onion
1 bell pepper with 1/2 t. salt till soft (about 5 min)
Seed and chop
1 tomato
Mince or press
2 cloves garlic
Make white sauce:
In a big saucepan, Heat 2 cups milk (I reconstituted 2/3 c. powdered milk to make 2 cups) in a pyrex measuring cup and heated it in microwave.
Melt 1/4 c. butter and add 1/4 c. plain flour and stir/cook 2-3 minutes. Add hot milk and stir/cook till thick.  Add 1/2 c. parmesan cheese, the garlic, tomato, peppers and onions, black pepper to taste and 2 five-ounce cans of tuna, and the drained pasta. Serve from saucepan, or get fancy and turn into a casserole dish and top with buttered crumbs or cheese or paprika or other garnishment. I think it should make about 4 reasonable portions.

Note: 1/3/2011 made this without the tomato, and used chicken instead of tuna. Made with Angel Hair, is kind of similar to the Chicken Scampi at Olive Garden, without the $14+ price tag! That dish also had breaded and fried chicken tenders instead of baked, chopped chicken.